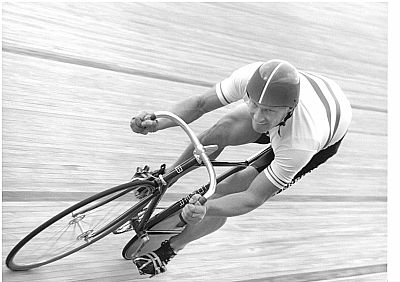 HiVelo is pleased to announce that ex-Olympian North rider Eddie Alexander has agreed to become our first Honorary Patron.

Eddie Alexander was born in Huntly (1964) and grew up in Inverness   He started racing at the age of 14 by riding time trials for Clachnacuddin CC.  He came under the wing of John MacMillan as his trainer and graduated to track cycling.  He was Scottish youth sprint and pursuit champion riding at Caird Park, Dundee before taking the 1981 Junior sprint and road race titles.

His earlier experiences on the outdoor velodrome at Meadowbank paid dividends when he later moved to start an engineering degree course at Heriot-Watt University.  By then riding for City of Edinburgh RC he went on to take multiple senior Scottish and British titles in sprint and the kilometre time trial.  He also won national tandem race titles in 1987 and 1988 riding with clubmate Stewart Brydon.

The pinnacle of a racing career shortened by serious back injury came with his bronze medal in the sprint at the 1986 Commonwealth Games.  This was followed by a 4th place in the Seoul Olympics 1988 sprint where the top medals went to powerful state-sponsored Eastern bloc competitors.

Eddie now stays in Kent and does a three hour road ride each Saturday morning with a group of local riders.  He claims to just hang on, but that is Eddie speak for he mixes it with the best of them.