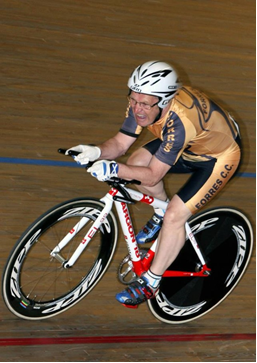 George Grant has proved that you are never too old to start track racing. Seven years ago he stepped onto the Manchester Velodrome for the first time and four hours later he had to be dragged off. He loved it. Along with his Forres club mate Peter Robertson he started to focus on track racing in the Masters age groups and with the help of his coach, Peter Ettles, he made steady improvements.

This year he won his first medal, silver in the British Masters Points race in the 70 plus age group. Good news travels fast. David Stewart MSP heard about it and tabled a motion of congratulations in the Scottish Parliament. The text is reproduced below.

Gillian Lambie from Scottish Cycling broke the news of the Holyrood motion to George when she phoned him for a quote. He was on a coach heading to Paris for the final stage of the Tour de France. It came as a complete surprise to him.

George travels monthly to the Sir Chris Hoy Velodrome for track training and longs for the velodrome in the Highlands to become a reality so that he can train on the track more often.

That the Parliament congratulates 70-year-old George Grant from Forres on winning silver at the British Masters Track Championships in the Newport Velodrome in South Wales; notes that George’s moment of triumph came late in the competition when he took part in the points race, a multi-lap bunch race where riders have to sprint every 10 laps to win points; understands that this race was run with three different age groups, including former professional and Olympian riders, combined into the one event, which made the race faster and more competitive; understands that George has been racing for 55 years and still trains five days-a-week; commends him on his success and his continued training regime, which is an inspiration to everyone, and wishes him continued success in the future