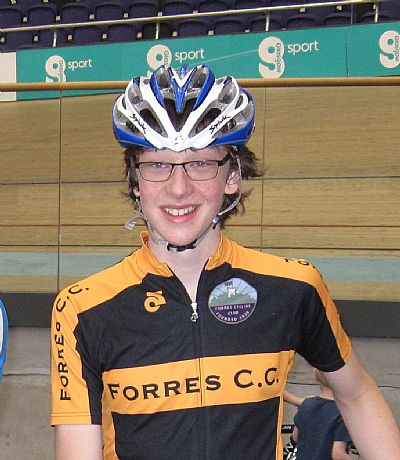 The achievements to date of our Autumn Star Award rider are outstanding enough until you realise that he has still got another year to compete in the Youth category. Riding for Forres Cycling Club, Kyle Cartmell has gone from 4th in the Scottish Youth Best All Rider Time Trial Championship in 2015 to silver medal position in the 2016 table. Indeed  the medals all went to SC North riders. It was a particularly close tussle between himself and Jed Scott, another northerner riding for Moray Firth Cycling Club, for the silver medal. The championship is calculated on the average speed of their fastest times at 10 and 25 miles. Jed had an excellent 23m 20s at 10 miles against Kyle’s 23m 43s but Kyle excelled at the longer distance with 1hr 1m 33s compared with Jed’s 1hr 3m 7s. It was close for silver but Kyle came out on top at 24.835 mph with Jed hot on his heels at 24.740 mph. The champion however was final year youth Alasdair Munro from Ben Wyvis Cycling Club who broke the 25 mph barrier with 25.223 mph.

Kyle made sure of the top spot however in the SC North Special Series which is contested over several non-standard distance time trials, mainly on hilly courses throughout the North of Scotland.

His talents also extend to off-road racing, having competed on the Scottish Highland Games Association track circuit the last couple of years. He won his age group both years and was accorded Youth Cyclist of the Year.

Also off-road he took 3rd place as part of a team of 4 at the gruelling 10 under the Ben cross country at Aonach Mor, an event not for the faint hearted.

When asked about his current bike, Kyle said he was delighted with his Trek Emonda but he would like to upgrade the wheels. He plans to use his HiVelo Star Award to purchase a second hand pair. Perhaps there is someone out there who has a quality pair of road wheels that are surplus to requirements. If so let us know and we can put Kyle in touch with you …. and go easy on the asking price, he’s a young promising bike rider that we want to encourage!

Kyle finds one of the most satisfying things about turning out for events each weekend, is that each time his times are coming down and his placing is going up. He is however realistic about his capabilities and he recognises that in bunch riding he has a lot to learn. Well, Kyle, if you recognise that, then you have already taken the most important first step to becoming a better bike rider and achieving your goal of being the best that you can be.

If you come across Kyle at an event don’t be afraid to give him plenty encouragement.