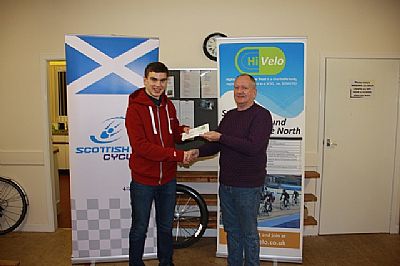 The Star Awards have been given a massive boost this year with Scottish Cycling North joining with Hivelo to double the quarterly award to £500.

The first recipient of the £500 is Alasdair Munro from Ben Wyvis Cycling Club. Alisdair was top youth time trialist in both the North and Scotland as a whole in 2016. It was an amazing year where North cyclists took the top 3 positions in the Scottish Best All Rounder time trial championship for youth riders. Kyle Cartmell from Forres took the silver medal and Jed Scott from Moray Firth the bronze.

We asked Alasdair about his short history in the sport.

HiVelo: What age did you start cycling at?

AM: I started cycling in 2014. I went out on my first club run with guys in the club. It was a hilly route going out of Dingwall and the others had been in the club longer than me. I had cycled on my own a lot before that doing long steady miles then building up the speed. My first race was a 10 mile time trial in 2015 which I did in 26 minutes and I won it. The feeling of winning that…., I was told that I had natural talent so I thought that I would keep on going and see if I can progress in this. My coach kept telling me that I had natural talent, you are able to achieve, so I got training plans from him and I constantly stuck to them because before then I was really keen on football, until about 3rd year in school when I was told I was quite good at cycling.

When I look back now I was overweight for my age, I was heavy for my age, so I cut back on what I ate and I started eating properly and then I started training properly as well and it felt right. I felt less fatigued, so then I was able to just keep progressing and eventually I won the North of Scotland BAR** for the first time and it was something that my coach had never foreseen. I also came second in the Scottish BAR and I realised that this was just my first year, I have another year in the youth category at this, I just want to progress and progress. The next year I was Scottish champion and I was just delighted.

HiVelo: Do you get into trouble for going out on your bike when you should be studying?

AM: No, homework comes first. Mum always make sure …… it’s a funny story actually, Mum and Dad and my coach as well, always said to me “no matter what, your studying comes first, the bike can come after it.” That just means I miss TV. I used to love watching films at night you know, but I have to miss that. That was a sacrifice that I made because I wanted to be in cycling. School work had to come first so I would get my homework done first and then I would think now I can get out on the bike, then later by the time I had my dinner it’s about 9 o’clock and it’s about bed time. I still go to bed at that time because I am tired, I just can’t watch TV. My brain just shuts down and my body shuts down so the best thing for me to do is rest.

HiVelo: The training will already be underway for the 2017 season?

AM: Yes, it came with a shock, cycling with a new team that I had never foreseen. I’m now with RT23 run by Sandy Wallace. For me moving from Ben Wyvis is a big jump so I am delighted with the move. It should open me up to some great experiences.

HiVelo: It was mostly time trials you were riding, have you any plans for a bit of road racing?

AM: Yes definitely. I was told that time trialling was pure grit, speed strength, no following wheels. Road racing is all about tactics, same with APRs and crits so I want to progress into road cycling to see where that gets me. I think my biggest challenge is going to be doing a 50 mile time trial.

HiVelo: Have you got a coach?

AM: No I don’t but my parents can teach me well. I have kept on using the training programme from last year.

HiVelo: Any plans of trying mountain biking or cyclocross?

AM: I did a cyclo cross at Brahan fairly recently. That was the first time that I realised that this isn’t as bad as I thought so I went mountain biking with Kyle Cartmell from Forres and it was the first time I realised that this is actually not bad training. It’s hard, it’s completely different to what I’m used to. I could do 10 miles on a mountain bike and feel a lot more tired than doing 10 miles on a road bike because it’s completely different. So yes, off-road is a good way of training.

HiVelo: So, the football has taken a back seat now?

AM: Yes, I used to have a season ticket for Ross County but that’s all stopped. It’s just all training,  I just watch the football on TV on the weekends.

AM: Well I think that it’s got to go towards new kit. Perhaps a new cycling jacket and helmet. I’m looking at a new pair of shoes, my other ones are getting worn and small so new shoes would be a good idea.

** The North and Scottish BARs are season long time trial competitions contested over 10 and 25 miles by youths.