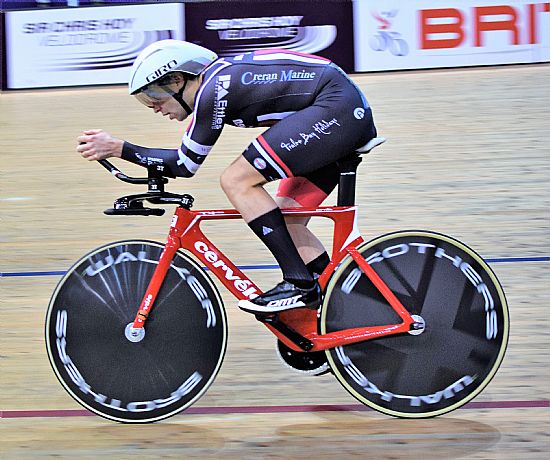 North time trial enthusiasts need no introduction to the exploits of KYLE GORDON (RT23).  Despite heavy offshore work commitments which have meant only intermittent race opportunities during 2017, Kyle has recorded some of the fastest times in Scotland breaking both 50 minutes for the 25-mile TT and the 20 minute barrier in the 10TT.

Kyle has since taken the decision give up work for 6 months to try to qualify for the 4000m track pursuit at the next Commonwealth Games (Australia 2018).

He raced at the Glasgow velodrome during October after very limited track time and did a 4.36, which was 11 seconds off the qualifying time.  He rode again at the Scottish Championships in November and took the Silver medal with a fastest time of 4.29 in his qualifying ride.  John Archibald won the Gold and met the standard for the Games with a 4.21.

Kyle was then invited to train alongside the Scottish Squad for the next 5 weeks which has given him valuable track time.  To qualify he has to achieve a time of 4.25 or better at two recognised UCI events.   At the meeting held in Switzerland on the 20 December, he put together a qualifying ride of 4.23, so now requires one more such effort with upcoming opportunities at the British championships (January) and an event in Newport.

Kyle’s current focus and dedication involves considerable outlay on food, accommodation, kit and travel which is self-funded from savings.   HiVelo is therefore pleased to announce an exceptional award of £500 made in recognition of his achievements and sacrifice.   A native of Alness, Kyle has been a long-time supporter of the campaign to build a second velodrome here in the North of Scotland.  He feels strongly that it would greatly benefit the fitness levels and skills of riders from all over the Highlands, especially during the long winter season.  In particular, it would remove much of the burden of travel and expensive overnight stays otherwise involved with irregular forays down to Glasgow.  A local track will also enable use by schools leading to the creation of a North youth track development squad and future medallists.