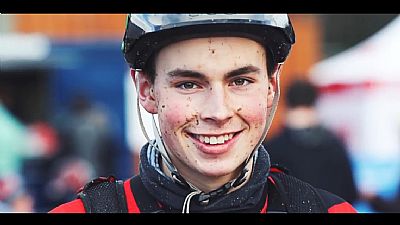 My name is Angus Fraser, I am 16 years old and live in Alness.  I’m lucky to have so many great trails right on my doorstep, so every day I am out on my bike.

I bought my first proper mountain bike in August 2016, and started racing competitively in March 2017.

During the year I also competed in the 2017 POC Scottish Enduro Series, travelling to Fort William, Pitfichie, Dunoon, Innerletithen, Laggan and Dunkeld finishng 13th overall in the U19 category in my first year of racing.  This year I am aiming for an overall top 10 position.

I’m super excited to have been accepted for a place at BASE (Borders Academy of Sporting Excellence) in Galashiels starting in August this year.  I can’t wait to start the course, and am most looking forward to improving my bike skills and technique, with coaching from the guys at Dirt School.   My aim for the future is to race in the Enduro World Series professionally.

So far in 2018 I’ve entered the first two rounds of the Highland Hardline Series in Golspie and Learnie, took part in the Dunkeld Enduro, and entered the first round of the POC Scottish Enduro Series at Laggan.   This weekend I’m racing at Macavalance in Glencoe, which will be absolutely brilliant fun.

It’s been a busy few months already, but I can’t wait for the rest of the 2018 season!