HiVelo is pleased to announce that this quarter’s bursary Award has gone to Karra Laing for her perseverance and achievements in mountain bike competition.   The £500 award is made jointly between Scottish Cycling (North) and HiVelo to promising North riders aged 14-17 from any branch of the sport.   Let Karra tell her own story … 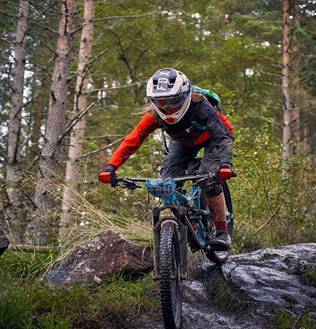 “My name is Karra Laing and I am 15 years old and live in Rothes in Moray. I am a competitive mountain biker and travel all over Scotland competing in racing events including the Scottish Enduro Series and other local and national events.  I started mountain biking when I was introduced to the sport with my school Craigellachie Primary and Go MTB course.  I started racing competitively when I was 10 years old by competing in the Scottish Cycling dirt crit series.  I have had many achievements over the last few years that I am very proud about such as being on podium at major events including the World Cup in Fort William, coming 3rd place in the girls’ mini downhill event, taking part in the Ten Under the Ben endurance race, and the highlight in 2017 was being asked to join the professional race team of Mikes Bikes Aviemore.   My race team supports me by servicing my bike and giving me cycling clothing to wear which is a great help.

I also helped to organise the first Moray schools team to enter the 24-hour Strathpuffer event in January 2017.  This team effort with fellow cyclists and Moray council staff and parents was one of the best experiences and actually made my passion for mountain biking stronger than ever even in freezing cold conditions.

I am passionate about mountain biking as its makes you feel so good when I am out on my local trails around Speyside.  It’s hard to balance school work and exams and when I jump on my bike and get out in the fresh air, everything seems so much clearer.  I would really like to inspire other young people to join me as the mud is so much fun and I am looking at setting up a club at my local school.  I volunteer with my local club as a junior coach for Moray Mountain Bike Club and I am also part of the Scottish Cycling Regional Development Squad for North Scotland.

I would like to apply for a HiVelo/SCN Stars bursary award to enable to me to seek specialist coaching this year.   I have secured a place at the Borders Academy of Sporting Excellence- downhill mountain biking course due to start in the Autumn this year.  I have not had a good start to this year due to health issues and a broken collarbone and my confidence has taken a dip.  I would really like to use the funds to gain personal coaching from a qualified coach to take me back up to the level I was at last year.

As you can imagine, the cost of coaching, and also travel, entering events and kit is very expensive and I play the accordion to try and raise funds for my hobby but would welcome any funding support that you could give.  I intend to race in the Mini downhill in the Fort William again in June which is the World Mountain Bike event.   Later in the year I will compete in the Scottish Downhill Association races, Scottish Enduro series and Muckmedden events.  For the next year I intend to get stronger, fitter and faster competing more nationally in Enduro and Downhill races.”